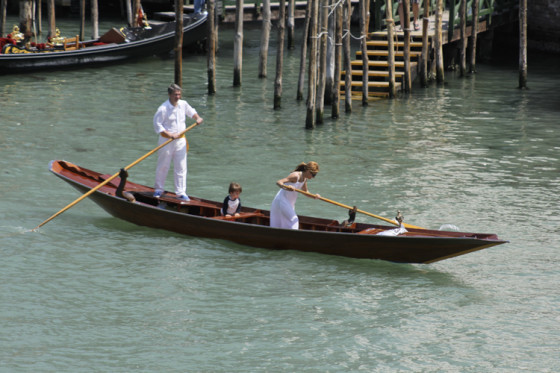 You will see below my article from Easyjet’s magazine explaining how after 20 years in Venice I finally learned how to row Venetian-style, standing up but not quite like a gondolier. 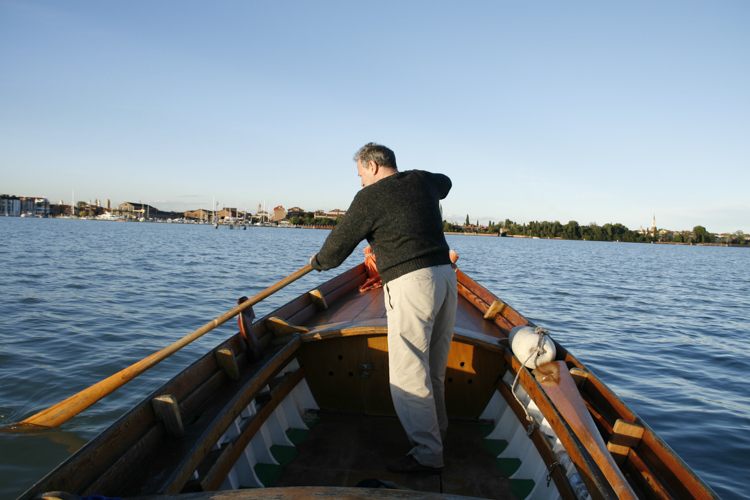 On 8 June Venice hosts the 40th edition of the Vogalonga, a marathon rowing race of almost a 1,000 boats around Venice and the islands of its lagoon. I have been invited to join a Dragon Boat from the Thames Dragon Boat Club in London, and I will be sending Twitter posts  of this unique spectacle throughout the 30 kilometres on @thewinetattoo

* That’s the traditional Venetian style of rowing standing up

“What on earth am I doing here?” is all I can think as I desperately try to keep my balance standing up at the front of a long, narrow rowing boat in the middle of one of Venice’s busiest canals. Wobbling as I attempt to avoid falling into the freezing depths, with water taxis speeding down one side and a vast vaporetto (water bus) chugging towards me, I hardly notice the grand palaces that line each side. Instead, I concentrate on gliding the long oar through the choppy waves. Somehow, we manage to edge in the right direction, avoiding disaster – for the moment.If you’ve ever looked at a gondolier and wondered what it would be like to try the traditional Venetian standing-up style of rowing, known as Voga Veneta, I can tell you – it’s not as easy as it looks. 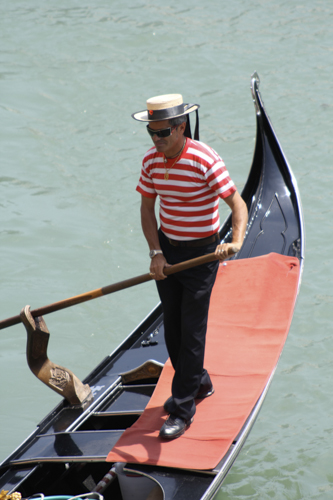 There are some things in life that you just never get round to doing. I have lived in Venice for 20 years now, and to my shame and endless teasing by local friends, had never tried – let alone mastered – this ancient skill. The city has a dozen active Voga Veneta rowing clubs, with brilliant courses for beginners, but there always seemed to be an easy excuse: bad weather, not enough time, not fit enough. Yet whenever I sat out on the waterside of my local bar in Cannaregio, I felt a twinge of regret as a sleek wooden sandolo (traditional, flat-bottomed boat) glided silently past, effortlessly propelled by two upright rowers. “Shouldn’t I be able to do that too?” I’d ask myself, before ordering another glass of Prosecco.But this year, I vowed, things would be different – no more excuses.So, when the chance came up to learn Voga Veneta, I grabbed the oar with both hands. I even had a goal in mind: participating in the ultimate rowing competition, the Vogalonga, which takes place in Venice every summer.People have been practising the Voga Veneta since the founding of Venice in the fifth century, when the technique was perfected for a standing oarsman to propel a long flat boat through the shallow waters of the lagoon and  the narrow canals of La Serenissima.For centuries, the Voga was an integral part of daily life. Then motorised boats arrived, turning Venice’s world upside down, and rowing was relegated to a poor man’s pursuit, while gondolas became strictly for tourists. All that changed in 1975, when a group of influential Venetians decided to do something to raise awareness about moto ondosa, the deadly waves created by motorboats, water buses and cruise liners that were slowly but steadily eroding the city’s foundations. Their idea was the Vogalonga, an annual non-competitive ‘race’, where anyone who rowed could take part, and motorised boats would be banned from Venice for the duration. A marathon-style course was set up, beginning in St Mark’s Basin and stretching for 30km across the lagoon, past the islands of Burano and Murano, before turning back to Venice for a triumphant last stretch along the Grand Canal. With no winner, it was just about getting people on the water. What started out in the inaugural event as 500 enthusiastic Venetians rowing their traditional boats has now ballooned into over 6,000 participants in 1,600 craft. Everything from kayaks and canoes to sleek Oxford and Cambridge-style racers, and gaudy Chinese dragon boats arrives from all over the world. While many now try to finish as fast as possible, Venetians still tend to take it slow, stopping off at the islands for lunch and a few glasses of wine, lazily coming into the Grand Canal by the end of the afternoon. 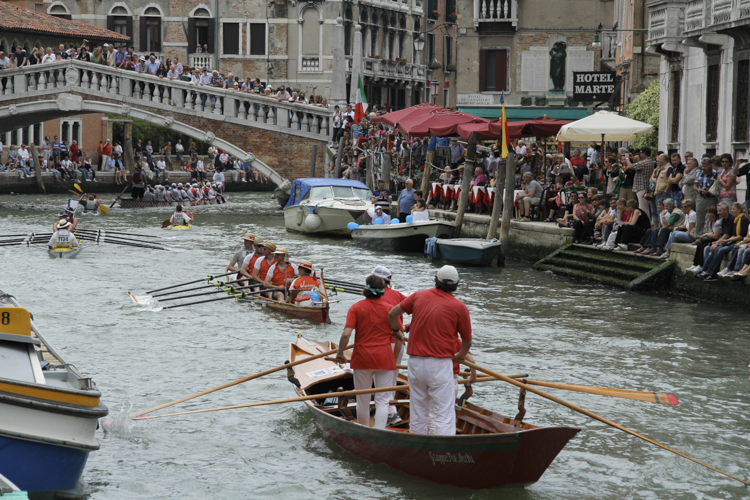 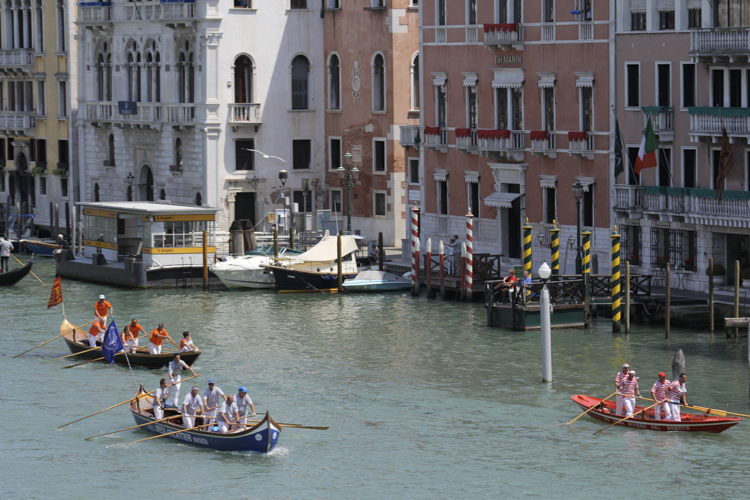 It would be easy to sign up for lessons at a nearby club, but I have so many Venetian friends who are Voga fanatics that I’ve asked three of them to be my teachers.My first lesson is with Gigi Vianello, owner of the Mascaron, one of Venice’s oldest osterie (wine bars). Before even getting near the boat, Vianello insists on having lunch: baby artichokes from the nearby island of Sant’Erasmo, succulent masorini (wild duck) from Venice’s lagoon, and far too much Raboso, the favourite wine of Ernest Hemingway. As we head out, the Mascaron waiters look slightly concerned, rolling their eyes as if to say, ‘That’s the last time we’ll see him’. But Vianello, a giant of a man who resembles a bull in a china shop on dryland becomes, like all Venetians, a different person when he steps into his boat: organised, attentive and immensely knowledgeable about manoeuvring through the city’s maze of canals. To understand the basics, he wants us far away from other boats and the wicked waves made by the motorised water taxis, or motoscafi, so we pass the Doge’s Palace, cross St Mark’s Basin and head out into the lagoon until we reach the island of San Clemente – once a quarantine refuge for Crusaders returning from the Holy Land and now the site of a soon-to-be opened luxury hotel. With no other boats here, there’s no one to see me look like an idiot, and the calm water is perfect for a first lesson. 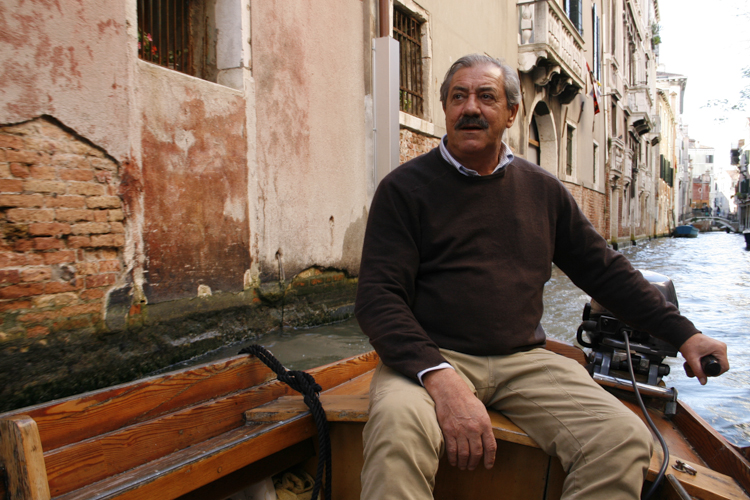 We’re in a sanpierota, a big, heavy craft that my coach says is perfect for beginners as it’s very stable, so there’s little chance of me overbalancing and taking an unplanned dip in the lagoon – though he assures me that happens to everyone at some point. We start by popping in our fórcole: carved, open cradles that lock into the sides of the boat and hold the oars in place. Next, the rowing technique, which seems quite simple. Start with the oar out of the water, the thicker, ribbed side facing the sky, then lean forward while pushing the oar backwards through the water, before raising it and returning it to a position parallel with the body and doing it all again. 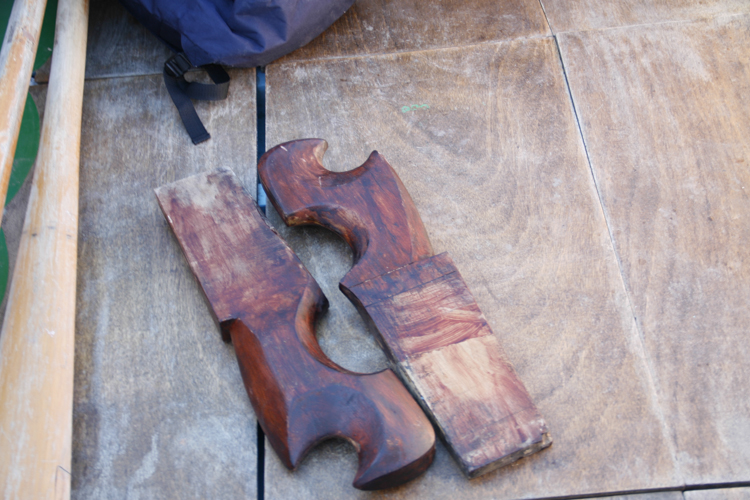 The forcole for the oars 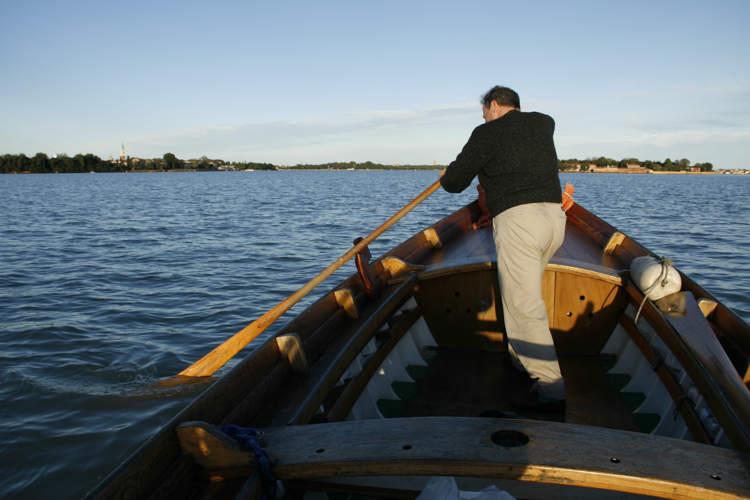 On the lagoon with Palladio’s Chiesa Redentore behind

“The crucial thing,” says Vianello, “is not to try too hard, because the harder you try to push, the more errors you’ll make.” Easier said than done, as every few strokes my oar pops out of the cradle. Soon, however, the movements begin to feel more natural. I can finally look ahead, rather than concentrating on my oar, to enjoy the spectacular wetlands rising out of the water as the tide goes down and, in the distance, the sunset silhouette of Palladio’s Redentore Church.I’m in the front, where all I theoretically have to do is propel us forward, while Vianello is sitting at the rear, steering the boat. We end up rowing for about an hour, by which time he reckons I’ve grasped some of the basics. But just when I’m beginning to feel comfortable, we change places to see how I handle steering. Again, it sounds easy: “Use the oar as if you are slicing a knife through butter,” says Vianello, but this is a total disaster, as all I succeed in doing is directing us around in circles.Of course, that famous regatta is only the showboating side of this rejuvenated pastime. Today, there are clubs all over the city, and they’re proving a great hit with young and old alike, both in Venice and in the countryside, where there are many more. Not only do they cost less to join than a gym, but the workout you get from an hour’s Voga is far more strenuous than jogging – once you get past the blisters. And, although the Vogalonga is the big event, there are also dozens of other, fiercely competitive, regattas. You don’t even need your own boat, as the clubs have stock for members to choose from and many, such as the Settimari (settemari.com), welcome tourists to come along and have a go. 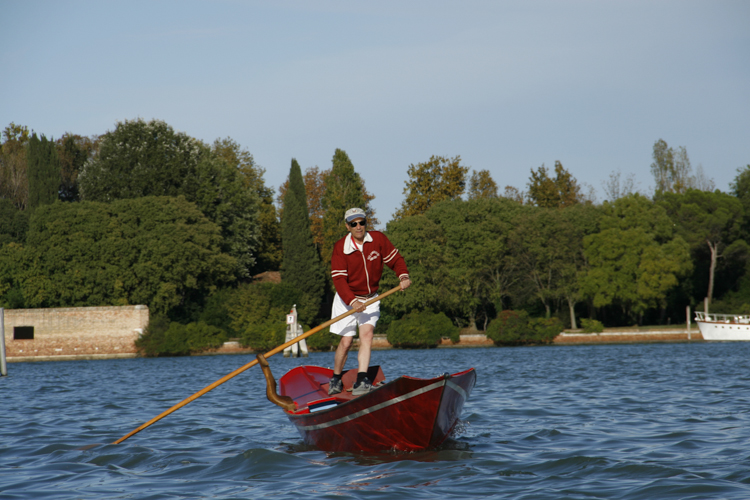 But back to the final lesson of my challenge – and my biggest test yet – which comes with Giorgio Crovato, founding member of the Settemari rowing club and respected author on Venice. His boat is moored in the heart of the city, by the Misericordia Canal. This is where I live, so the stakes feel raised somehow. Fortunately, I start well, managing to avoid making a fool of myself as we negotiate the Misericordia and duck under low bridges, with local friends shouting encouragement from the busy fondamenta. I even hear Gino, a grumpy retired vaporetto captain, shouting that I’m rowing too slow as he can see crabs hanging onto my oar. Rowing in the heart of Venice is another ball game altogether. At times it’s so narrow you simply have to pull your oars in. Then, suddenly, Crovato shouts, “Da mi venti come un regatta,” challenging me to row fast for the next 20 strokes as if this were a race. This works until the oar pops out of the fórcola.I’m about to curse my luck when, suddenly, the waterway opens out and we are smack in the middle of the Grand Canal. All ill feeling is forgotten. Nothing, in all my years of living in Venice, compares to this moment, standing up in this tiny boat rowing past the city’s splendid palaces and churches. Despite the busy traffic, even the vaporetto and transport boats have to give us priority. I’ll admit I don’t last long, but Crovato, the typically effusive Venetian, declares I am a natural. I’m not sure about that, but I realise now what I’ve been missing. The next step is to find a boat willing to take me for the Vogalonga. So… anyone looking for a crew member? 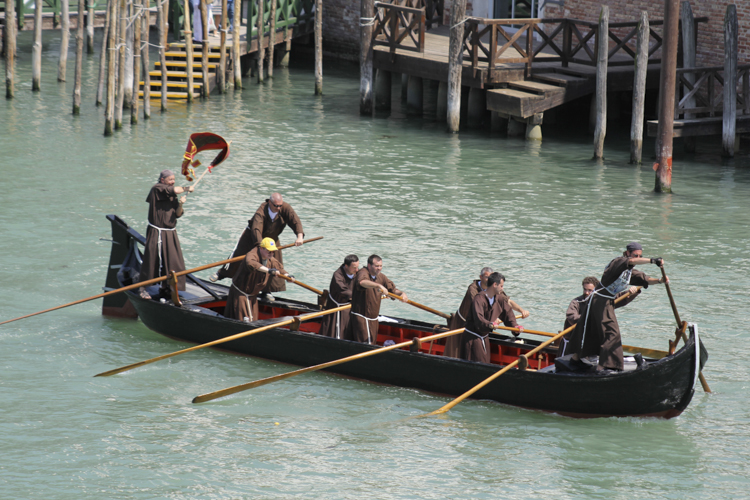 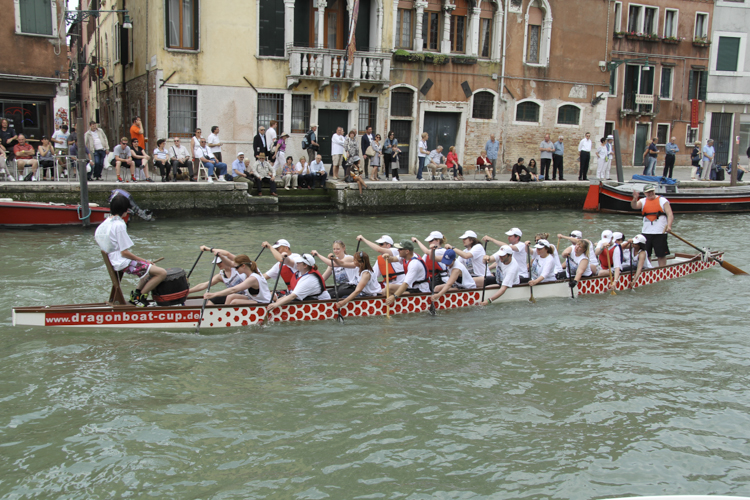 Dragon boat in the Vogalonga